Meifu-ten, one of Japan’s largest and oldest bonsai exhibits, was held January 14-16 in Nagoya. The 82 annual event contained scores of trees from all over Central Japan. Although I wasn’t able to attend, I had the opportunity to carry most of the exhibited bonsai during my visit to Japan last fall. The photographs for exhibited trees were taken in Inazawa on November 10-11, 2011. The trees’ owners – or designated professionals – showed up with trucks and vans, and a handful of us loaded and unloaded the trees for a day and a half. An impressive load of trees

Kinbon managed the photo shoot, hiring two local contract photographers, each set up in adjacent warehouses. Peter Tea and I provided the labor for one of these. Peter spots the trees for the next shot

The photographers indicated the order in which the trees were shot. Each owner was given a time slot ahead of time which helped us manage the workflow. After setting up a display, we stood back and watched the photographer work. He began by making an index shot with a DSLR to check the lighting. These shots included a numbered card to help them track information about each tree. He then took 3-5 shots with a medium camera shooting film! A Kinbon staffer recorded the tree variety, height, pot maker and owner for each shot. The work proved surprisingly fun. We got to see an exhibit up close, and we had time to consider each tree. Some were outstanding – others made it clear that this was an exhibit for hobbyists. All told, it was a good mix of trees. Apart from the few trees that arrived in trucks chock-full of bonsai, every other tree I carried arrived in a van. Japanese bonsai professionals seem to drive vans exclusively, and of these, the Toyota Hiace was one the more popular models. Following the general automotive fashion I witnessed in Japan, most were black, white or grey. The shot below captures atypical variety in van color and style. Occasionally, Peter Tea and I learned a bit about the trees we handled. The red maple below, Acer palmatum ‘Seigen,’ was developed at Aichi-en. It’s an extraordinary example of the variety. We also had a chance to think about how the trees were displayed. Medium displays typically featured a larger tree and a smaller, a conifer and a deciduous or broadleaf evergreen tree. Some made great pairings. Close-up of the maple 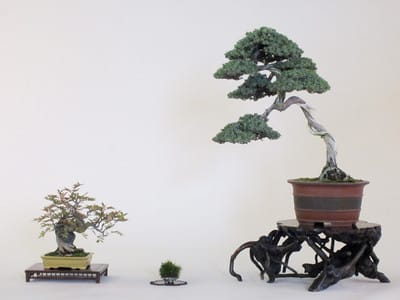 Pine and broadleaf evergreen with fruit

The remaining trees were pleasant on their own.