I picked up a few new tools during my visit to Japan last fall. Among others, I purchased a large root scissors, a wire cutter, basic bonsai scissors and a water wand. Can you guess which has become my favorite? The root scissors are a bit different than the pair I’ve been using for 15+ years. The blades are slightly larger, but more importantly, the handles are off-set. I saw these at Aichi-en and asked how well they worked. The response was positive so I ordered a pair. The off-set handles let me easily make straight cuts without my fingers getting in the way, and the extra-long blades make quick work of large rootballs. They are overkill for smaller trees, but perfect for days when I’m repotting dozens of large, young pines. The benefit of off-set handles Here are the brand markers – I don’t know the translation

Of my new tools, the root scissors are the most fun to use, but they’re not my favorite. Likewise the new basic scissors. The old-fashioned shape is fun, but the performance is very similar to my normal scissors. What about the large wire cutters? 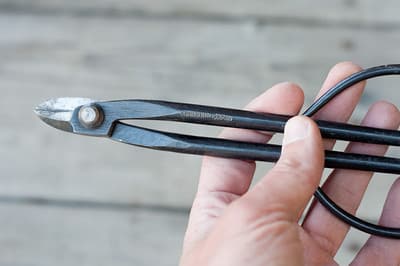 I have used a number of wire cutters in different sizes and shapes over the years. I was surprised, then, to arrive at Aichi-en and note that Mr. Tanaka had so many variations of these wire scissors in his tool set. These seemingly clunky cutters are great for cutting wire or small branches covered in wire. I’ve also seen them used (with care) as pliers. Turns out, Toru Suzuki of Daiju-en is a huge fan of these scissors. While I was perusing the tool selection at the ASPAC Convention in Takamatsu, Suzuki grabbed these and recommended them as highly as he knew how. Which is funny because I broke mine cutting a fairly small wire the day I unwrapped them. A few minutes later, the same thing happened to Peter Tea. I wasn’t entirely surprised – the tool salesman had recommended a higher quality pair – but I did think I’d get through the first day unscathed. Fortunately for me and Peter, Mr. Tanaka took great care in grinding down the tips and now we both have “custom” wire cutters that work great.

That said, the big surprise for me is how much I’ve come to appreciate the new water wand – my favorite of the bunch. We used some of this brand at Aichi-en as well as some cheaper models. The difference was clear. As Peter put it, “I can either use this wand and water the garden quickly or use the cheap ones and take twice as long.” What’s great about the wand is that it delivers a ton of water in gentle fashion. The wand I’ve been using for years is great for small gardens – and I admit, my garden is very small – but this nozzle is super for watering larger gardens. The nozzle head is thick brass which makes it harder to dent than the thin copper heads that come with many copper watering cans. And despite the lack of threaded fittings, the tapered copper jams into the end of the hose and stays put. I’ve smiled every time I’ve used the wand for the past 5 months, but I don’t know where to get them in the states. If anyone has suggestions, I’d be happy to hear them.