Just before the doors opened for day two of Bay Island Bonsai’s 16th annual exhibit, Daisaku Nomoto and Boon Manakitivipart led a critique for BIB members. Some comments focused on the displays, others on the bonsai. As seen from the front – Sierra juniper

Nomoto had a few ideas for improving the Sierra juniper above. He wanted the first branch on the right to be divided into two blocks of foliage instead of a single, large block. The same goes for the first branch on the left, which he also wanted to be more “compact” – a favorite phrase of Nomoto’s that he used when he wanted branches pulled down and closer to the trunk.

As the top part of the trunk is fairly straight, Nomoto suggested adding some bends. Boon added, and Nomoto concurred, that the tree could be tilted to the left.

The final comment was that the smaller branches on the tree could benefit from more bends. Straighter branches would be OK on younger trees, Nomoto said, but branches on older trees look better with curves. The California juniper above could benefit from a more compact apex. And a finer point – Nomoto mentioned that the feet on the pot raised the pot further above the stand than he’d like to see. Taller feet, he suggested, make more sense for trees that don’t have so substantial a trunk.

Of the shimpaku growing on a slab below, Nomoto recommended reducing the soil area by about 40% and adding more of a slope. He really liked the stand but found it a bit deep for the tree as it extended several inches in front of and behind the slab. Shimpaku on a slab

When discussing the bunjin black pine below, Nomoto had us look closely at the first two branches. They currently go out and then down to form half arches. He’d like to see the branches bent down and then out. If the branches start out on a horizontal line, bending them towards the trunk – making them more compact – would result in even more of an arched shape. If the branches descend vertically from the trunk, they can be brought in without creating an arch.

Of the suiseki, Nomoto recommended a much smaller stone for the display. Of the accent, Nomoto found the foliage was a good fit with the display but wanted to see it maybe one inch taller. Nomoto spent quite a bit of time discussing shohin display. For shohin, display is extra-important as the trees are often displayed in groups. He told us there are no rules, but there exist a lot of rules. In other words, while there may not be black and white rules detailing the placement of trees, there are very strong conventions. Nomoto passed out copies of a shohin display from a recent Kokufu exhibit as an example we could learn from (p. 181 in Kokufu 88). Below, a pomegranate, a shimpaku, a lavender serving as an accent plant, and a scroll comprise a display. Nomoto’s comment: the scroll was too low. He raised it a couple inches to the level pictured below. What if both trees in a medium-sized display point the same way? Put the accent off to the side. Nomoto noted that the display below had good flow. A little cotoneaster in the adjacent display could benefit from a taller stand. Nomoto recommended a small root stand to raise the tree above the accent. 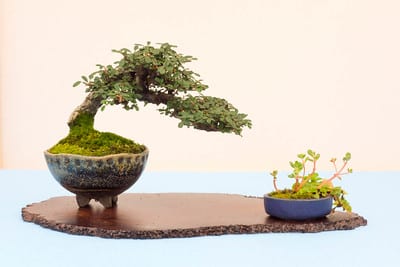 The relative size among display members also matters. Nomoto pointed out that the two trees in the display below were roughly the same size. Better the quince were smaller so the trees could be different sizes. Then we come to stands. Nomoto wanted to see the juniper below on a lower stand – one that bore less similarity to the other stand in the display. Of the black pine and flowering plum below, Nomoto made the same comment he did about the Sierra juniper displayed with the contorted quince. Both trees are similar in size – better if the plum were smaller. When the critique wrapped up, we sped back to our stations just as the doors opened to the public, armed with a bit of extra information to share with guests.