Almost 15 years ago, I signed up for my first Kathy Shaner workshop. I’d been informally studying with Kathy for some time – this would be my first opportunity to work with her on one of my own trees. Or soon to be mine. The trees for the event were included with workshop registration – ume from Muranaka Bonsai Nursery in Nipomo, CA. I drew the second largest tree of the lot. I was happy. It had a large trunk that split to three trunks/branches above. And I was told to expect double pink flowers.

Several years passed – no flowers. I’d already carved away the lower 3-4 inches of the trunk and begun developing the nebari. I carved the trunk and helped new branches ramify. But no blooms. I’ll admit I’m no fan of double pink, but the point of ume is the contrast between new flowers and old trunk. So I started grafting.

Another 5 years passed. The tree looked great with white blossoms – the fragrance was unforgettable – and I’d had fun learning how to care the variety. But ume don’t bud back well, and the grafting became a regular affair. Then, out of nowhere, a few dark buds appeared from some of the original branches. Before long, I saw the first few double pink flowers. Which confirmed my decision to graft.

This year I’m mid- re-grafting the entire tree. I let the branches grow past where I can safely cut back so I’m essentially starting from scratch. Here’s the tree a few weeks ago with the last few white and pink blossoms. Last year I had good luck with my grafts – over half took and I ended up with around 7 new shoots. Another dozen or so grafts and I’ll be back in business. Scion – one year after grafting Typically I graft in years when I don’t repot. This is supposed to maintain the vigor of the tree and help push energy to the scions. I hadn’t repotted the tree in a few years – not a problem because the pot was large and the drainage good – but I remembered doing things differently the first time I grafted the tree.

I looked through old photographs and found that when I grafted I cut the branches back heavily and repotted at the same time. I thought I’d try the same this year. Here’s a shot from below half-way through cleaning the bottom of the rootball. Not standard practice, but clearly demonstrative of the amount of roots removed. Half-way through the rootball Bottom of the rootball prepared

I cleaned the remainder of the rootball and realized the nebari was developing well. When I first changed the level of the nebari, only three or four large roots emerged from the base of the trunk, the rest emerged a couple of inches higher. Now fine roots circle the trunk. Not necessarily expected of ume bonsai – trees on which deadwood is far more important than roots – but not undesirable either. As several years of residue from organic fertilizer displaced most of the bonsai soil left in the roots, I decided to wash the rootball to improve the drainage. Rootball after washing away excess soil and fertilizer

I set to grafting right after repotting. Here’s a brief step-by step: 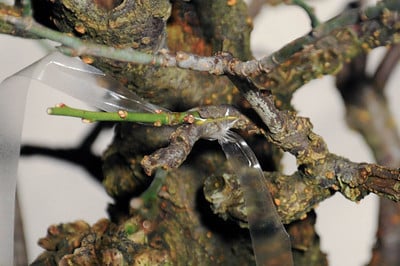 Grafting and cutback really cleaned up the tree. Here’s how it ended up. Ume after grafting and repotting

I’ll have a good idea of which scions will make it around Fall. Some usually brown out immediately, others offer a green tease and then flame out in summer. If the grafts make it to Fall, I can usually count on their success. The goal is to get enough in place to begin thinking about showing the tree at a future BIB exhibit. When that time comes, I have just the pot in mind – a yellow oval I picked up in Japan last year – great motivation for me to keep up the work.