About a year has passed since I picked up two large Tempelhof hinoki with the aim as developing them as bonsai (see “New hinoki bonsai“). The first real bonsai work began last year when I repotted one of the trees. As I dug down to locate the surface roots, I discovered that the tree was grafted. As the transition from understock to scion was stark, I held off on any further work and thought about whether or not to attempt an air layer. I left the second tree alone.

Over the past year I asked around for any information about whether or not air layers work well for hinoki. I found no evidence either way. Not happy with the unsightly graft line, I decided to layer both trees this spring. After removing a couple inches of soil, I had yet to find a surface root, and as I was combing through a solid mass of roots, the work was slow. 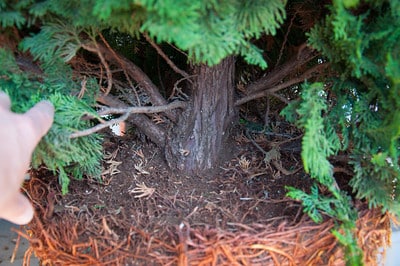 The continued digging paid off and I finally found the graft line and a surface root. I then removed the rest of the soil covering the surface roots. I was struck, as I worked, by the different root growth in the different soils in which the tree was planted. I believe the tree got its start in Oregon. After several years in the ground, the tree was balled and burlapped and planted in coarse organic soil. Given the choice between growing in clay or in some combination of bark and sawdust, the newer roots opted for the organic mix. Roots above, clay below Profusion of roots with some burlap peeking through

It took between one and two hours to remove around 6″ of soil and roots, but with the graft now well-exposed, I can proceed with the layer – details next week. Ready for the layer!