For my young trees in development, I tend to focus on a single question during the growing season: do I prune now or wait until fall? The goal at this stage is to develop the trunk as fast as possible. Because the sacrifice branches are well-positioned, I’ll let them continue growing and revisit the tree in fall.

The tree below is similar, if more vigorous. Like the first tree, the above tree has good curves and the sacrifice branches are well-positioned. I’ll let it grow until fall.

The tree below looks the same from across the room, but up close it’s easy to see an awkward branch division. The first branch on the right side of the tree emerges vertically and is as thick as the trunk. To avoid this area from swelling in the future, I removed the vertical section. After removing the vertical section of the branch

Looking closely at this branch, the base still looked awkward so I removed the whole thing. Based on the size of the stub that came off with the branch, I’m glad I made the cut. The stub at the base of the branch 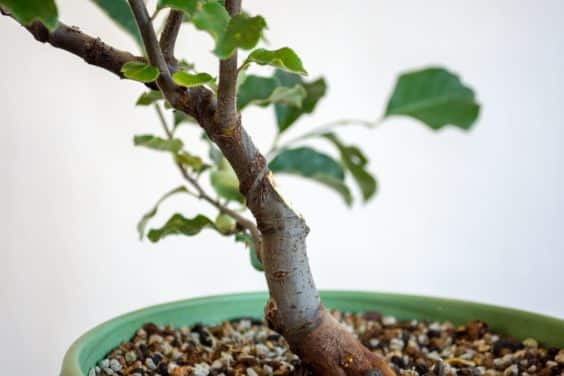 After removing the the first branch on the right

Further up the trunk, I found three branches that emerged fairly close to each other. I removed the center branch to avoid swelling in this area. Three branches growing close to each other After removing the center branch

The fourth quince I looked at looked like the others, but up close I found an even more pronounced slingshot-like branch division. By cutting this branch now, I can avoid swelling in this area and let the tree can begin to heal sooner rather than later. After removing the branch on the right

Just beyond this area, the trunk splits into four branches. Two are small. And two are relatively large. Because the two larger branches are too corse to bend, I’ll leave them alone for now so they can help the trunk thicken but plan to remove them later. Either of the two thinner branches will make a good new leader so I wired them both. I’ll decide which to keep when I revisit the tree in fall. After wiring the thinner branches

I can follow this basic routine above for the rest of my quince.

It’s also a good time to apply more fertilizer as these trees typically grow through summer and into fall.

Previous Post: « Can you see the signs? Identifying weak roots by checking the foliage
Next Post: Defoliation follow-up: refining a Korean hornbeam »