For those who have worked with a lot of collected junipers, this post can be summed up with two photos. 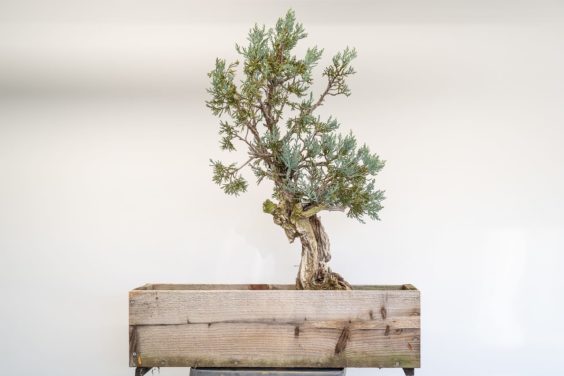 I acquired this tree in the pot pictured at top so I assumed there were some important roots that emerged quite a ways from the trunk. The hope is always that there are some roots closer in which would facilitate planting the tree in a smaller container.

When I took the tree out of its container, I was happy to see lots of fine roots everywhere. The question remained, however, where the roots came from.

I began my investigation on the left side of the rootball as it was the furthest point from the base of the trunk. I found that I could shorten the trunk a few inches without losing many roots. The end section of the long root

Further investigation revealed a significant root with a lot of fine roots attached. I was curious of there were other significant roots so I followed the main root back to the trunk. Along the way, I no additional roots. The long root on the left side

The right side also proved to be a bust. Although the deadwood is nice on that side, there is no active lifeline. As soon as I realized the tree was far from ready for a bonsai pot, I planted it in a narrow wooden box where it can grow for a year or two before I line up some root grafts. In the meantime, I can start thinking about how to design a compact tree around the deadwood along the trunk.