Nine years ago, I didn’t think much about the size of the curves I created when wiring – I just knew that straight was bad and that curves were good! Up to a point, it turns out. By making very tight curves, I unwittingly determined that these trees would become small-sized bonsai. Here’s the trunk of a nine year-old black pine. Were I to let the trunk develop for another five years, the trunk would swell to the point where the curves would disappear. To maintain the curves, I removed a large escape branch and shifted the focus to developing branches. Easier said than done. 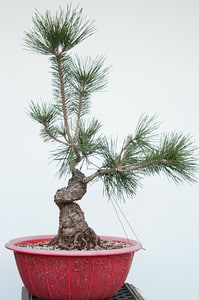 After reducing the trunk, I was left with one vertical branch and one lateral branch. As I can’t do much with two branches, I simply removed some needles and will plan to decandle in summer in an effort to stimulate new shoots. I could make the exact same comments about the tree below. As the curves in the trunk are tight, letting the tree continue to thicken would result in a straight trunk. I removed the main escape branch which left me with two branches. I wired these and thinned some others and will decandle this pine as well in summer. It’s funny to learn such basic lessons so many years into a project, but better late than never. If I’d continued to let these trees grow freely, I’d start to wonder where the curves went and wish I could turn back the clock. After making similar reductions to all of my young trees with tight curves, I’ve avoided this fate while creating a lot of work for myself come decandling time. Details to follow in June.